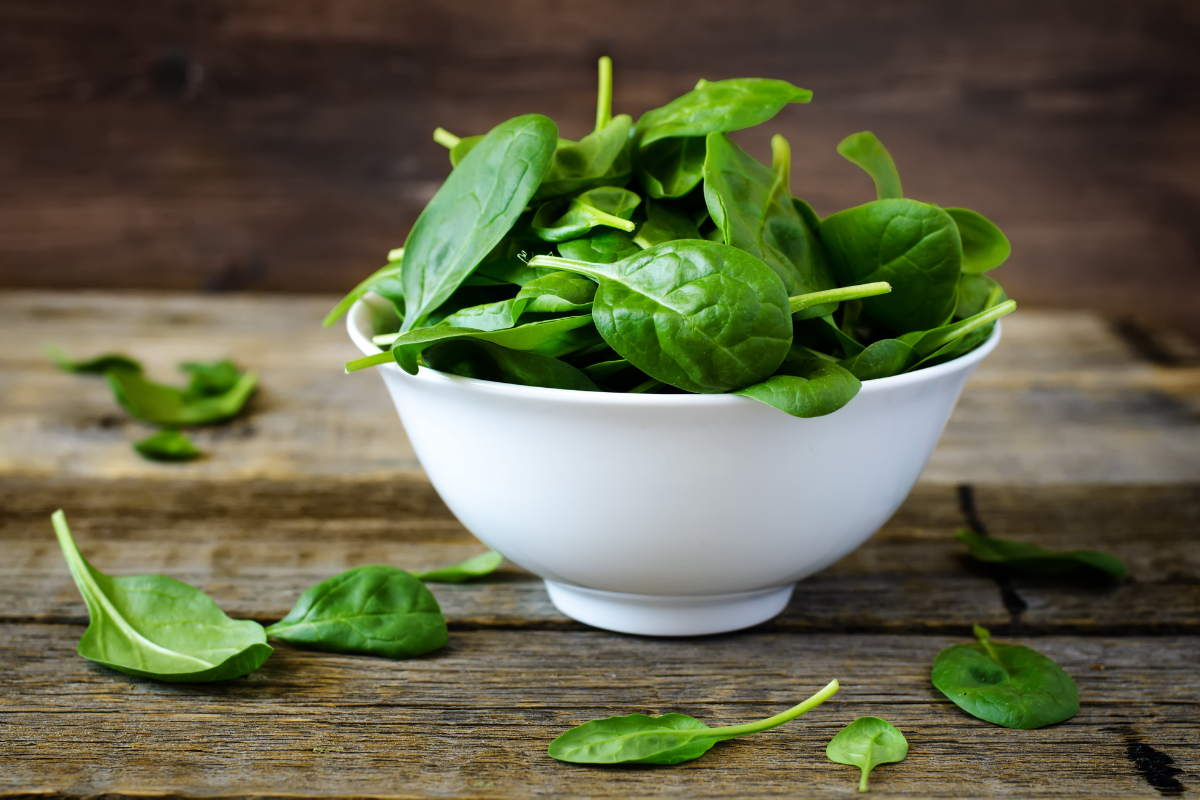 Spinach hated by children, loved by adults. Well-prepared spinach can be an unusual delicacy and an addition to various dishes, which also has numerous health properties.

Spinach leaves have anti-cancer properties and protect against atherosclerosis. The healing properties of spinach are due to beta-carotene, vitamin C and lutein – known antioxidants. In addition, spinach is rich in potassium, iron and folic acid.

Spinach is a vegetable whose properties and nutritional values were already known in ancient Persia, where it probably comes from. In the 7th century the ruler of Nepal sent spinach as a gift to China and hence the vegetable was called “Persian herb”.

In the 11th century it was transported by the Moors to Spain and has been known as the “Spanish vegetable” ever since. In the 16th century, Catherine de Medici, leaving Florence to marry the King of France, took her own chefs with her to prepare her spinach as she liked, and hence the term for dishes served on spinach – in Florentine.

Spinach contains powerful antioxidants, therefore it protects the body against free radicals. Its consumption may reduce the risk of cancer and degeneration.

It also slows down atherosclerotic processes and delays cell aging, which also has a positive effect on the appearance of the skin.

In addition, the lutein contained in spinach protects the eyesight – affects visual acuity and counteracts the effects of harmful UV radiation.

It also delays the process of macular degeneration and retinitis pigmentosa.

In addition, potassium and magnesium found in spinach regulate the work of the nervous system. They also reduce nervous tension and improve the ability to concentrate.

Spinach also helps maintain the health of teeth and bones. All this is due to protein, phosphorus, calcium and magnesium. Magnesium affects bone density, and the remaining macronutrients are their building blocks.

Spinach is considered a treasure trove of iron that is recommended for the treatment of anemia. Meanwhile, plant products (including spinach) as a source of iron are completely wrong. A similar amount of iron to spinach is found in beef, but only 1 percent of the former and 20 percent of beef.

Spinach leaves contain a lot of potassium-lowering potassium, so people with hypertension should eat them. In addition, potassium works with magnesium to regulate the work of the heart.

Be sure to include spinach in your diet if you stay fit. It is low in calories: 100 g is 23 kcal. In addition, the potassium and B vitamins contained in it participate in the burning of carbohydrates and fats and accelerate metabolism.

Scientists from the University of Louisiana (USA) found that it is helpful in weight loss also for another reason. They argue in the Journal of the American College of Nutrition that spinach extract contains thylakoids – substances that prolong the feeling of fullness (up to 2 hours after a meal). These compounds promote the secretion of satiety hormones, which slow down the digestion of fat and reduce the desire to reach for a snack.

Green leaves are especially recommended for pregnant women. The folic acid contained in them prevents the defects of the fetal nervous system. In addition, it protects against cardiovascular diseases.

Spinach is also rich in vitamin K, which plays an important role in blood clotting, B vitamins to lower cholesterol, and vitamin E.

Spinach is available in stores in the form of fresh leaves or frozen food. Fresh spinach is rich in vitamins and minerals.

However, you should not be afraid that the frozen one will have less of them. This is due to the fact that when frozen immediately after the seasonal harvest, it retains its nutrients and organoleptic characteristics unchanged.

The form of spinach you choose should depend on the season. Fresh spinach should be chosen in summer and frozen in winter.

It’s good to know that spinach is best frozen by yourself. Only then will we be sure of its quality.

Combine it with cheeses – blue cheese, feta cheese, Parmesan cheese or oscypek cheese. Fruits go well with it – pears, grapes, strawberries, citrus. Pour olive oil over the salad – this way you will increase the absorption of beta-carotene and lutein.

Spinach and cheese (e.g. blue cheese) are also perfect for pasta (spaghetti or penne). To make a sauce, do not boil the leaves! They will lose their value and taste, let alone their appearance. Stew them in olive oil with garlic and nutmeg.

If you sprinkle the leaves with lemon juice, they will keep their vibrant green color. Remember that spinach significantly reduces its volume when stewing, so if you cook for several people, buy 1.5-2 kg.

The spinach must be fresh. During transport and storage in a warm place, most of the nutrients are lost. If it is withered, it is better not to buy it

Spinach stalks should not be yellowed and leaves must be bright green in color.

Unwashed spinach should be stored in the refrigerator, loosely packed in a foil bag – this way it will not lose its nutritional value and will stay fresh for about 4 days.

Cooked spinach should be consumed within 24 hours.

Frozen spinach retains most of the nutrients.

Spinach should be thoroughly washed as leaves and stems accumulate dirt and sand.

In order for the spinach to cook evenly, remove excessively thickened stems.

Spinach leaves can be patted dry with a paper towel or dried in a lettuce dryer.

The best way to prepare spinach is to steam it. The process itself should be short, exposure to water, light and temperature can destroy vitamin C and B.

Boiling spinach in plenty of water is a waste of its vitamins and minerals that dissolve in water.

You can also stew it briefly, covered, in your own juice (spinach secretes it abundantly – this is also the water left on the leaves after washing), do not pour the broth, rather thicken the spinach with a little roux.

Nutmeg and white pepper are perfect for seasoning spinach. If it seems too tart to you, you can add a little cream.

Due to the fact that spinach contains oxalic acid, it is advisable to add sour milk or eggs to the dish to compensate for calcium losses

If you soak the leaves in ice water after washing, they will keep their nice color. Then you have to drain them thoroughly. Remember that the spinach must dry well before being added to the salad.

Iceberg lettuce can be replaced with spinach.

Spinach is a great addition to lasagne, spaghetti and pizza.

Nutritional values of spinach (in 100 g)

Spinach is not as rich a source of iron as it seems. This is due to the fact that in the old days the iron content of spinach was incorrectly determined.

Spinach is rich in vitamins and other valuable ingredients. Despite the fact that it is not rich in iron, it contains many advantages related to the presence of ingredients valuable for health.

Spinach contains oxalic acid. It is an anti-nutritional substance. In order to prevent its effects, eat spinach accompanied by calcium.

There are many benefits to eating spinach. It should be remembered that you should not eat it every day.

In addition to many vitamins and minerals, spinach contains oxalic acid. It can be absorbed from the gastrointestinal tract, and this leads to the deposition of substances in the kidneys that favor the formation of plaques called stones.

Therefore, people with a tendency to kidney stones should limit their consumption of spinach. Eating it from time to time, i.e. once a week, is not a problem, only daily consumption can increase health problems.