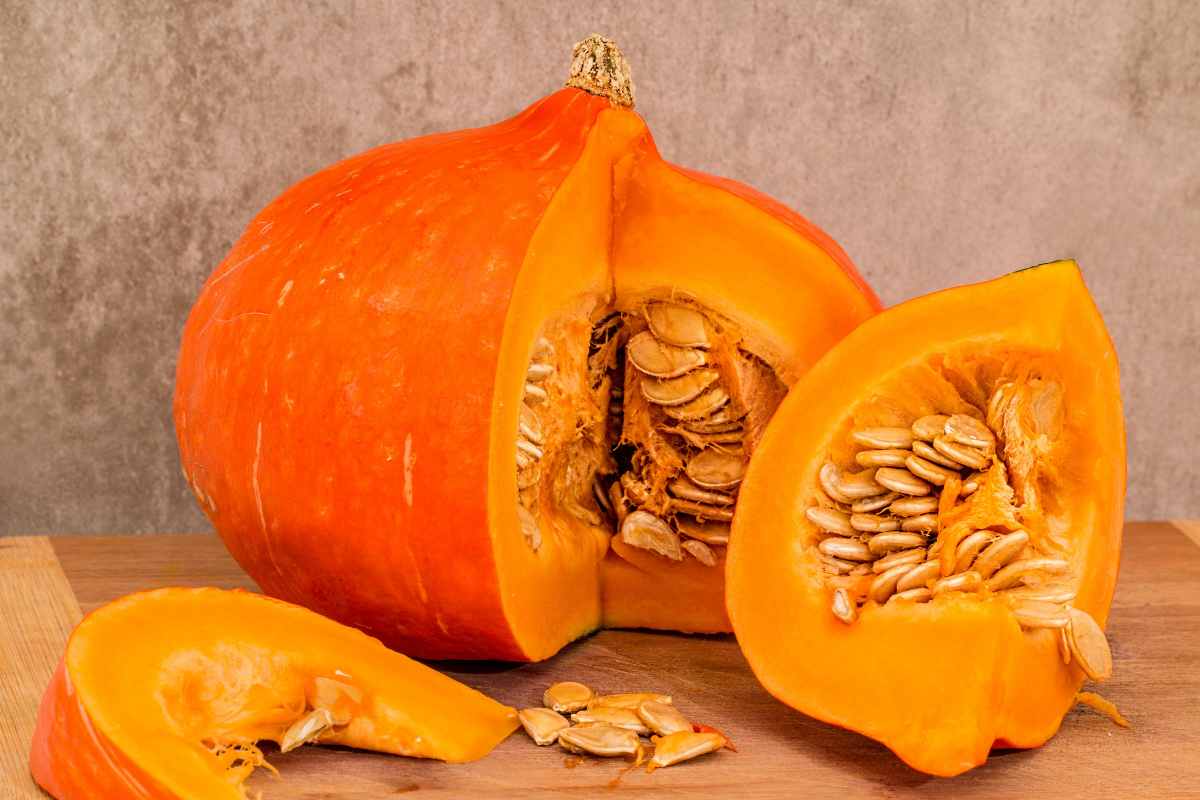 The nutritional value of pumpkin and its healing properties cannot be overestimated. Pumpkin is a vegetable rich in vitamins and minerals, especially the zinc necessary for men, and it is low in calories. Fresh pumpkin seeds help get rid of pinworms, tapeworms, and other parasites. Check what other healing properties the pumpkin has and try out recipes for pumpkin dishes.

Pumpkin and its healing properties and nutritional values ​​were already appreciated by Mexican Indians. It has found application both in Mexican natural medicine and in cooking (recipes for pumpkin preparations are passed down from generation to generation). However, the first pumpkin pie was made by some of the first settlers in America, a hollow pumpkin filled with honey, milk and spices and then baked. Currently, pumpkins are grown primarily in the United States. Motron, Illinois, is considered the “pumpkin capital of the world”. In the USA, pumpkin is used not only in the kitchen. It is also a symbol of Halloween that was born in this country. However, of those intended for “scares” on Halloween, it is not necessarily possible to prepare tasty dishes, because pumpkins fall into two main categories – edible and ornamental. Not all of them are orange – there are white, bluish and even European red varieties.

Researchers at East China Normal University in Shanghai (China) have found that the substance found in the fig leaf extract – D-chiro-inositol – can replace insulin. This substance stimulates the regeneration of beta pancreatic cells in diabetic rats and regulates the activity of insulin.

Pumpkin glycemic index = 75, therefore pumpkin is not indicated in diabetes.

Increasing the level of insulin in the blood leads to a decrease in sugar levels, which in turn results in a reduction in the amount of oxygen free radicals that damage, among others, beta cells responsible for the production of insulin. According to scientists, pumpkin extract may not only act prophylactically in people at increased risk of developing insulin-dependent diabetes (type 2), but also significantly reduce the need for insulin in people who are already sick.

It should be noted, however, that this is how the substance contained in the fig leaf pumpkin pulp extract works. Pumpkin itself is not indicated in diabetes because its glycemic index is high, at 75.

Pumpkin is rich in beta-carotene – it is orange, red and yellow plant pigment (it is thanks to it that the pumpkin has such an intense color) and at the same time a substance with healing properties. Beta-carotene – like all carotenoids – is an antioxidant, which means that it inhibits harmful oxidative processes, and thus – can prevent the development of cancer. Studies have shown that consuming pumpkin frequently reduces the risk of stomach cancer, breast cancer, lung cancer and colon cancer.

PUMPKIN FOR HYPERTENSION AND HEART DISEASE

Beta-carotene lowers the level of bad cholesterol. Thus, it prevents the accumulation of cholesterol in the walls of the arteries, and thus – prevents atherosclerosis, and further heart disease, such as a heart attack or stroke. In addition, the pumpkin regulates the level of blood pressure.

PUMPKIN FOR THE PREVENTION OF MACULAR DEGENERATION (AMD)

Beta-carotene contained in the pumpkin ensures the proper functioning of the eyesight, especially at dusk. Vitamin A, into which beta-carotene is converted in the human body, is a component of the visual pigment found in the retina of the eye, which allows you to see in twilight.

In addition, beta-carotene reduces the risk of macular degeneration, which is the leading cause of blindness in old age. It has also been shown to inhibit the development of xerophthalmia (dry eye syndrome) and prevent lens damage and cataracts.

The winter and flu season are just around the corner, so it’s important to strengthen your immune system as soon as possible. Pumpkin is rich in zinc and vitamin C, which are essential for a healthy immune system. A cup (245 g) of cooked pumpkin contains over 11 milligrams of vitamin C (19% of the DV)!

It is also worth adding that beta-carotene contained in the pumpkin soothes inflammatory processes and helps to reduce the symptoms of flu and colds.

Instead of spending a lot of money on expensive anti-wrinkle creams, choose healthy products such as pumpkin. Pumpkin is one of the best foods for your skin. It has plenty of vitamin A, vitamin C and E, and all of these vitamins effectively fight wrinkles. Pumpkin is a vegetable especially rich in vitamin A, which regulates the production of sebum in the skin and keeps the skin looking young. One cup of boiled pumpkin provides as much as 245% of the daily requirement for vitamin A. You should like a pumpkin!

Did you know that pumpkin is 90% water? It is worth remembering about proper hydration of the body, a dehydrated body can lead to constipation and other health problems. How to do it? Drink freshly squeezed juices, green smoothies, avoid dehydrating foods (e.g. coffee, alcohol) and include water-rich foods such as pumpkin in your diet while the season is on.

Modern phytotherapy recommends pumpkin seeds for parasites. Pumpkin seeds have antiparasitic properties due to the content of cucurbitacin – a substance contained in the film surrounding the seeds, protecting them against microorganisms. Most of the cucurbitacin is in fresh, soft seeds, which is why pumpkin deworming treatment is best carried out in the fall.

Pumpkin is low in calories (10 grams is 26 kcal) and provides dietary fiber, therefore it helps in weight loss. In addition, it helps to cleanse the body of toxins and has deacidifying properties. Very often it is acidification that is the cause of overweight or obesity.

PUMPKIN – HOW TO CUT? SELECTION AND STORAGE, PREPARATIONAND SERVING

How to cut a pumpkin? Use a sharp knife to cut off the top of the pumpkin and then cut it in half. Then remove all the stones and the fibrous flesh. The seeds can be put aside and roasted later.

Pumpkin reigns on our tables from the end of September to the end of January.

After slicing, the pumpkin must be prepared on the same day.

Cooking: to cook the pumpkin, cut it into large pieces, rinse it, put it in a large pot with 250 ml of water (1 glass – water does not have to cover the pumpkin), cover and cook for 20-30 minutes until it is soft. You can also steam it (12 minutes).

Cooking in the oven: after cutting the pumpkin in half, wash it in cold water, put it on a large baking tray and bake for about an hour at 175 degrees C.