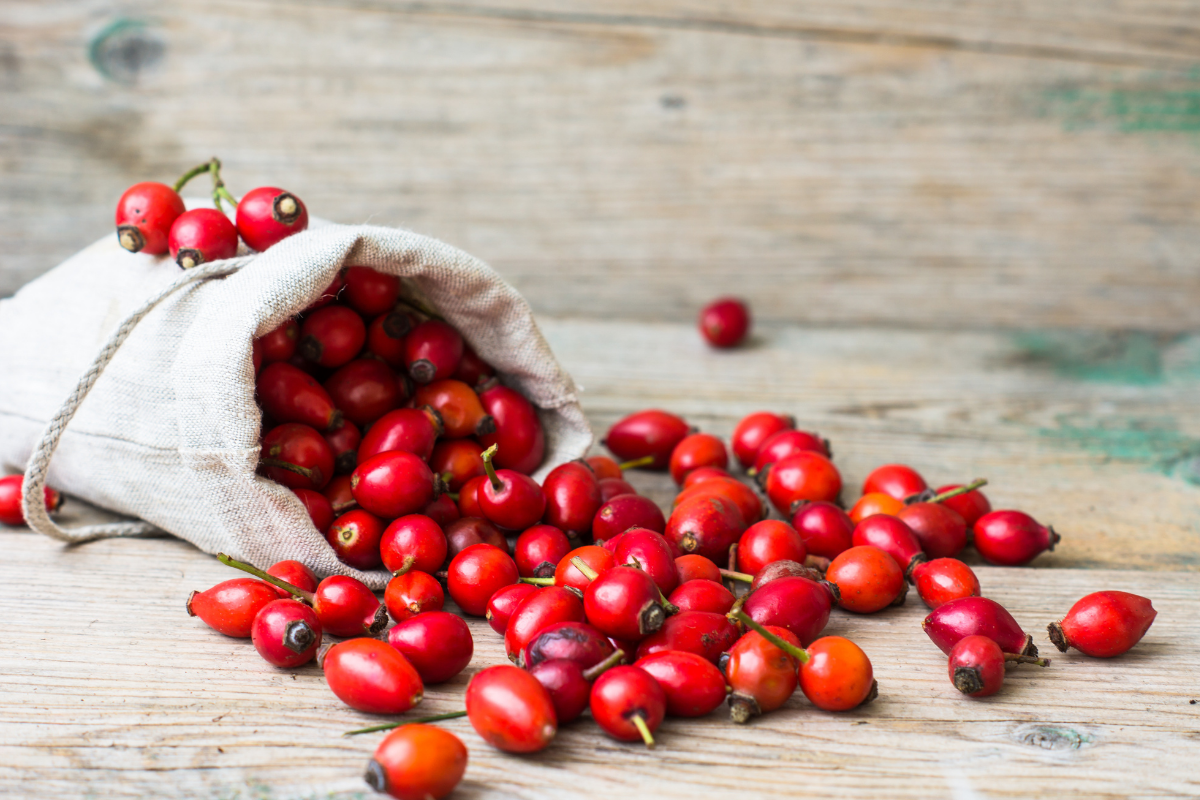 Wild rose is the most versatile of several hundred varieties of the plant. She enjoys the well-deserved title of the queen of flowers – she delights with her beauty and fragrance, and works great as an ingredient in cosmetics and numerous medicinal preparations. The properties of rose oils and substances contained in it smooth the skin, remove fatigue, support the digestive system and soothe joint discomfort.

About 20 species of wild rose grow in Poland. They differ mainly in the color of flowers and fruits, but they are all equally desirable raw materials for both the cosmetics and pharmaceutical industries. Scientists have listed over 130 compounds contained in this plant that have beneficial effects on the body. The flowers contain extremely valuable essential oils, flavonoids and anthocyanins. Fruits are rich in vitamins – mainly C, but also A, B1 and B2, E, K – flavonoids, tannins, sterols, organic acids, folic acid, pectins, carotenoids. Rose leaves are also used in phytotherapy, because the natural vitamin C contained in them is almost 5 times more active than synthetic vitamin. The high concentration of so many active substances makes the rose a multi-purpose application.
It is impossible to overestimate the health benefits of wild rose, its aroma, taste and beauty. Therefore, wild rose is highly appreciated by herbalists and pharmacists, as well as gourmets and the cosmetics industry.

Wild rose is a very popular plant – it is not at all difficult to pick fruits and rose petals yourself. Rose bushes decorate city squares, parks and home gardens. They need a lot of sun, but otherwise have modest requirements, so they also grow along roads, on the edge of forests and wastelands.

It has been known for a long time that plants are an inexhaustible source of valuable nutrients. However, only now, having modern analytical tools, we can get to know the secrets hidden in plants (even the most common ones).

Wild rose (Latin Rosa canina) is a flowering shrub that is common throughout Europe, northern Africa and western Asia. It is known for its delicate pink or white flowers, which transform into the characteristic red, spherical fruit full of seeds. In the colloquial language, this plant is also known as “dog rose”, which is related to its Latin counterpart. This name was already used in ancient Rome by Pliny (circa 1st century AD). He assigned the term “dog rose” because it was believed at the time that the plant had the power to heal rabid dog bites. Whether it had anything to do with the currently diagnosed rabies – it is not known. Despite this, wild rose appeared in herbal medicine already in the times of Hippocrates (around the 3rd century BC). However, as a medicinal plant it was most appreciated during the Second World War. At a time when Britain was unable to import fresh citrus fruits, the government decided to organize a national rosehip harvest. This was to prevent a significant vitamin C deficiency in the British.

Currently, scientists are increasingly interested in natural nutrients. The wild rose has returned to favor. Its fruit is of particular interest and is used for brewing herbal infusions, making jams, marmalades, jellies, syrups, wines and other drinks (e.g. with hibiscus). In Sweden, there is also the characteristic “nyponsoppa” soup, the main ingredient of which is the rosehip fruit. Rosehip seeds, which are used in the production of cosmetic oil, are also becoming more and more popular. But the question is still the same – what is there about the plant itself that makes it so desirable?

First of all, the value of a rosehip lies in its fruit. The truth known for centuries, thanks to modern research, has only been confirmed. Rosehips are particularly high in vitamin C – ten times more than black currants. It is one of the richest plants in this vitamin. Already 1-3 of its fruits are enough to cover the daily requirement of this vitamin. In addition, fruit has a high content of antioxidants such as ascorbic acid, phenolic compounds and carotenoids. They have a significant impact on the protection of the body against free radicals.

Advanced analyzes of chemical compounds in extracts of rosehips and seeds allowed for the isolation of specific substances that directly affect the human body. The quercetin present in the fruit has been tested for its anti-cancer properties. Research shows that this plant-derived flavonol is effective in inhibiting the growth of melanoma cells. Folk wisdom has for years stated that wild rose works as a remedy for annoying kidneys. On the one hand, the fruit’s ingredients have a diuretic effect, which helps to cleanse the excretory system. On the other hand, the action of the same components produces an immunomodulatory effect in our system. Increased levels of gamma-globulin, neutrophils and monocytes were observed in people taking the prepared rosehip extract. This indicates that the body is ready to fight potential infections and infections. Research also shows that rosehips can help treat osteoporosis patients. Some subjects experienced a significant reduction in pain and improvement in joint mobility.

However, in addition to the rosehips, it is also worth being interested in its other elements. Proanthocyanidins have been identified in the leaves and flowers of this plant. They belong to the group of flavonoids with very strong antioxidant properties. Like other flavonoids, they inhibit the development of melanoma cells. In addition, it has been observed that these compounds strongly inhibit the production of melanin, which may manifest itself as whitening the skin or fur areas of laboratory animals. This gives the potential to be used in cosmetics that lighten skin discoloration.
The inconspicuous seeds in rosehips also show interesting properties. The oil pressed from them is rich in provitamin A (mainly beta-carotene), tretinoin and other retinoic acids, which are precursors of vitamin A. Additionally, this oil contains large amounts of essential fatty acids, such as omega-3 and omega-6. A recent discovery among the ingredients of rosehip oil is tiliroside. This flavonoid, in addition to its hepatoprotective properties, turns out to be very active in the process of fat metabolism. It causes an increase in fatty acid oxidation in the liver and muscles, as well as a decrease in lipid accumulation in white adipose tissue. The use of this substance has remarkable potential in counteracting obesity.

Ripe rosehips, in addition to a very large amount of vitamin C, contain a number of tannins, flavonoids, carotenoids and vitamins (A, B1, B2, E, K, folic acid), which have a fantastic effect on our body. The bile and diuretic effects of rosehip teas promoted by our grandmothers are also not a legend. As you can see, the general strengthening effect of this plant is an important argument for looking for this shrub in your surroundings.

Rosehip is an important ingredient in many medicinal products. First of all, it is found in cardiac herbal mixtures, vitamin preparations, strengthening, expectorant and diaphoretic preparations.

It can also be found in drugs that support the work of the liver and cardiovascular system.

Wild rose has a beneficial effect on health and well-being:

The Use of Wild Rose in Cosmetics

In addition to its medicinal properties, wild rose is often used in the production of cosmetics and home treatments.

It shows many valuable care properties:

The cosmetics industry mainly processes rosehip flowers. The extracted oil works great as an ingredient in perfumes, soaps and creams. On the other hand, rose water after the distillation process is a tonic, improving the appearance and condition of the skin.

Wild Rose in The Kitchen

Rub dry rose petals with a wooden spoon with sugar – spoon sugar for a handful of petals. Finally, add the lemon juice. Store in the refrigerator. Eat a teaspoon 3 times a day to reduce gastric acidity and have a calming effect. The grated rose can also be used in desserts (e.g. donuts).

Cover 500 g of rose hips with a glass of sugar and add 3/4 liter of pure vodka. Set aside in a warm place for a week, shake it occasionally. Pass through gauze and refrigerate in a dark bottle.
Drink a small glass of tincture twice a day as an appetite enhancer, improving metabolism and digestion.

Wild Rose – When To Collect It?

Collect rose petals at the beginning of flowering in dry weather and place them immediately for drying in the shade and in the air. The fruit is picked when fully ripe, but firm – from August to October.

Overripe or harvested after frost have less vitamin C. The fruit can be dried whole or hollowed earlier.