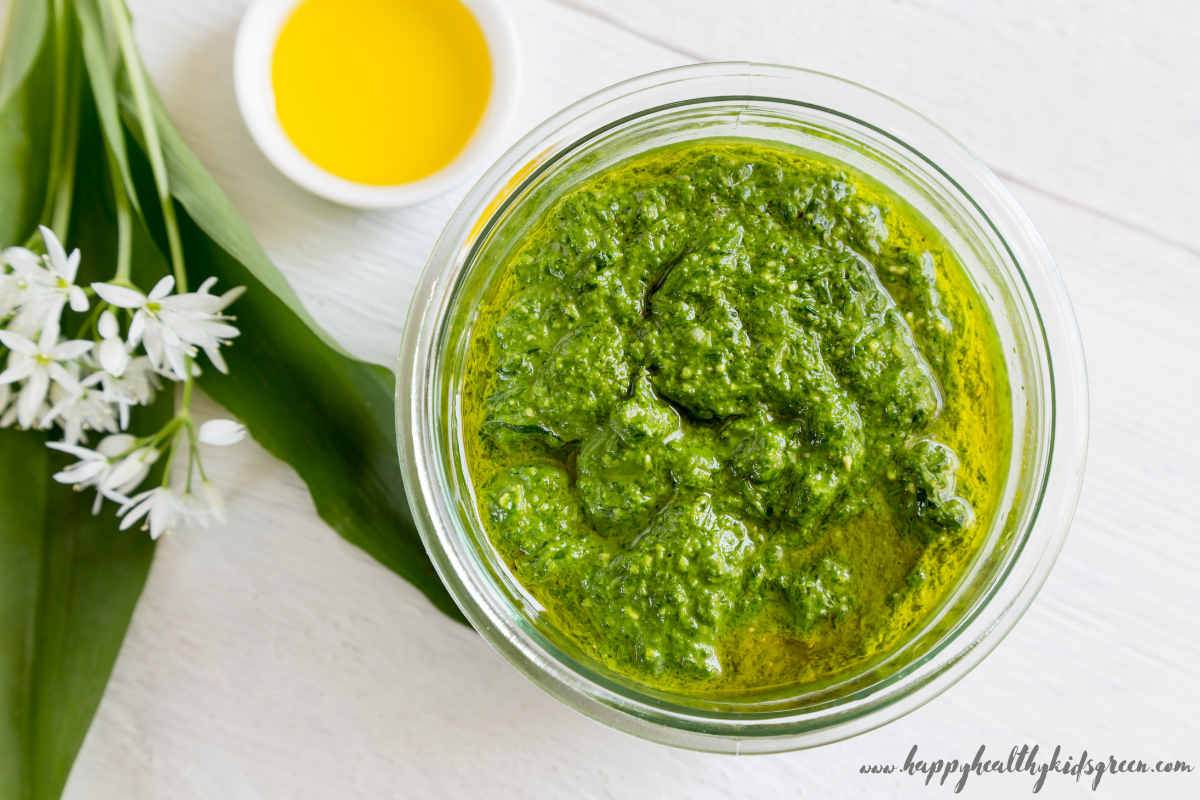 Allium ursinum, known as wild garlic, ramsons, buckrams, broad-leaved garlic, wood garlic, bear leek or bear’s garlic, is a bulbous perennial flowering plant in the amaryllis family Amaryllidaceae. It is a wild relative of onion, native to Europe and Asia, where it grows in moist woodland.

Wild garlic has all the properties of common garlic. However, it exceeds it in terms of the content of certain substances, primarily sulfur compounds, which have a positive effect on the cardiovascular and digestive systems, and also help fight viruses, bacteria and the yeast Candida albicans, responsible for mycosis. Check what other properties wild garlic has.

Bear’s garlic (Allium ursinum), also known as Gypsy garlic or witch’s onion, is a plant whose properties were already discovered by the ancient Germans. They treated wild garlic as a universal medicine. According to an ancient German legend, it was the bears’ first meal after waking up from hibernation (hence the name of the plant).

So they came to the conclusion that since garlic strengthens the effect, it is able to strengthen the human as well. It should be noted, however, that wild garlic is nothing like traditional garlic. It is not in the form of cloves, but leaves, which contain the most health-promoting properties and are the most frequently eaten part of it.

Wild garlic grows wild in forests all over Europe and some parts of Asia. In Poland, wild garlic shoots appear at the turn of March and April in the Bieszczady Mountains, the Kampinos Forest, Białowieża Forest and in the vicinity of Sandomierz.

Its characteristic features are long (up to 20-30 cm tall) lanceolate leaves, as well as spherical, white inflorescences with single star-shaped flowers emitting an intense garlic aroma, located on long (up to 50 cm) stems. White flowers contain harmful substances, therefore they are not edible.

According to the ordinance of the Minister of the Environment of January 5, 2012 on the protection of plant species, bear garlic is a partially protected plant – it cannot be picked in the forest! Fortunately, wild garlic can be grown.

There are seedlings for sale that can be planted in the garden or on the plot. In autumn and winter, you can reach for its dried leaves. Dried bear garlic is available in herbal stores (e.g. the price of 20 g is about PLN 2.50).

Wild garlic leaves are confusingly similar to the leaves of the May lily of the valley growing at the same time, and eating them can lead to poisoning. This is another argument for not collecting this wild plant in the forest.

Wild garlic, thanks to the content of sulfur compounds, prevents viral infections, especially respiratory infections, such as colds or flu, which is why some believe that it can also support the body in the fight against SARS-Cov-2 from China. In addition, the volatile substances contained in it, i.e. phenolic acids, thin the secretion that lingers in the bronchi, and thus facilitate expectoration, helping to fight cough.

In addition, wild garlic shows an antibiotic-like effect, because it destroys pathogenic bacteria in the digestive and respiratory systems, but without disturbing the balance of the natural bacterial flora.

In addition, it stimulates the production of immunoglobulins – antibodies involved in all immune processes, and thus mobilizes the body to fight diseases.

Wild garlic can also be recommended to people with the presence of Candida albicans yeast. It is also a very effective weapon against gastrointestinal parasites: pinworms, roundworms and even tapeworms.

It is said that wild garlic is the richest plant in Europe in sulfur compounds and contains several times more of it than traditional garlic. On the one hand, sulfur compounds protect the body against free radicals, and on the other hand, they stimulate the immune system to fight cancer cells.

A study published in the Journal of the American Cancer Society shows that these compounds are extremely effective even against glioblastoma (a type of brain cancer) and can be used as a non-invasive form of cancer treatment.

WILD GARLIC AND THE CARDIOVASCULAR SYSTEM

Compounds contained in wild garlic increase the level of “good” HDL cholesterol in relation to “bad” LDL, and also lower the level of triglycerides and cholesterol, which reduces the risk of atherosclerosis, and thus – also heart attack, stroke or coronary disease .

However, its positive effect on the circulatory system is mainly due to adenosine (it has much more of it than traditional garlic) – a substance that reduces the risk of blood clots because it has lower blood viscosity and lowers blood pressure through vasodilation.

Therefore, eating wild garlic has an auxiliary effect in the treatment of hypertension. In addition, this plant contains a lot of iron – the basic component of hemoglobin, corresponding, among others, to for storing and transporting oxygen in red blood cells.

Sulfur compounds are also effective in the treatment of rheumatic diseases. Sulfur is the basic building block of connective tissue and collagen that make up the joints, it affects the proper development of articular cartilage, facilitates their regeneration and efficient functioning. In addition, it has anti-inflammatory properties, thanks to which it soothes ailments of motor organs.

Like traditional garlic, it accelerates and intensifies the secretion of bile, improves the functioning of the intestines, and thus prevents flatulence.
It can also be used in the states of impaired bile production, as it also has cholagogic and choleretic properties. However, it is not recommended for people struggling with gastric or duodenal ulcer disease.

Sulfur compounds are also known for their detoxifying properties. They support the liver in the detoxification process, acting as a cleansing filter – it binds nicotine and heavy metals into compounds that are then excreted from the body. In addition, the rest of the sulfuric acid neutralizes many toxic compounds.

Sulfur is, among others the basic component of keratin – proteins of skin, hair, nails and collagen. Therefore, it is jointly responsible for their condition. When it is missing, nails and hair become brittle, and the complexion becomes pale and tired. Therefore, wild garlic is a desirable component of the diet for beauty.

Wild garlic – a recipe for olive oil with wild garlic

For its preparation, you will need wild garlic leaves (about 25 pieces) and 1 liter of olive oil (cold pressed). Cut the washed and drained garlic leaves into strips (with the stalks cut off).

Then put them into a liter jar or bottle, pour in olive oil and screw the cap on. Store in a dark and cool place for about 4-5 weeks.

After this time, remove the leaves from the jar. Then it is ready to eat. It retains its aroma for 3 months.

The oil should be stored in a cool place, but not in the refrigerator (it becomes slightly cloudy). A pantry or a cellar will be a better place.